Camping in NZ - a family tent adventure with Zempire Camping

Despite travelling a lot in NZ as a family, we've never been 'proper' camping until now, and by that I mean staying in a tent in a remote NZ location. We've done plenty of campervan trips like our Northland adventure last year, but tenting is next level in terms of preparedness and back-to-basics camping. So when Zempire Camping offered us some camping gear we jumped at the chance to try a new experience in a spot not easily accessible unless you take a tent.

We decided to go to Port Jackson at the very top of the Coromandel and stay at the DOC campsite there - it's 2 hours north of Coromandel town and reached only by some very windy and at times hairy gravel roads and there's no drinking water or hot showers so we figured it'd be a very good test of our first-time camping abilities!

Zempire kindly provided us with the Aero TL Pro Series inflatable tent, 2 Roco Lounger Chairs, 2 Roco Low Rider Chairs, a Kitpac round table, 2 single Monstamats, 1 twin Monstamat, a 2 burner Deluxe and Grill Camping Stove, and 2 Megadome Lanterns. Then the rest of the gear was up to us! Here's what else we took for the tenting adventure:

As first-time campers there were a few things we didn't take (or think about) that we would next time such as:

Putting up the Tent

The beauty of an inflatable tent is the speed you can put it up and its ability to withstand wind (which we got to experience firsthand with winds of up to 40 km/h during our stay at Port Jackson). Here's a time-lapse video of just how quick the tent was to get up:

There are 4 inflatable sections and once these are up (literally 5 minutes) it's just a matter of banging all the guide ropes in - so quick and easy!

After the tent was up, I took a video of the set up and our location at Port Jackson, idyllic much! With everything we had, we were set up well for 2 days of camping fun

So how was the actual experience camping at Port Jackson and would we do it again? You betcha.

We had unfortunately picked a week to camp which was SUPER WINDY by NZ standards - which is why we ended up choosing a site sheltered in the trees to escape the worst of it - that was until the last morning when we literally picked up the tent still fully inflated and moved to the beach front when the wind died away to nothing so I could get some photos!

We all slept so well on the comfy Monstamats - despite the fact a rookie error by me meant we were sleeping on them the wrong way up - what a wally! I assumed it was colourful side up but I now realise that makes no sense when you see how much softer the other side is - we'll know for next time!

Cooking on the camp stove was a breeze - well Mark tells me it was, you all might know I'm not much of a chef I tend to leave all the cooking to him, but we even managed to grill toast in the morning for the kids while boiling water for our morning coffee so they were happy!

The front awning is a great addition to the tent and means there's a nice shady spot to hang out even when its super sunny out - particularly in the afternoon when the NZ sun is at its most fierce!

One of the main reasons we chose Port Jackson for our first tenting adventure was so we could walk part of the Coromandel Coastal Walkway - a 10km stretch of beautiful coastline between Fletcher Bay and Stony Bay. You can walk the whole track if you have have someone to collect you at the other end - or walk all 20km if you want to do it in both directions. We walked from Fletcher Bay as far as Poley Bay - which was 8.5km return and include 350 metres of elevation gain which was enough for the kids and for us if we are being honest.

We did contemplate going as far as the main lookout but it was another steep 150 metre climb which we would have had to have done twice going there and back - it just means we can save the other half of the walkway for another time! I'll write a review of our walk in another post soon!

There's also the Muriwai Hilltop Walk loop you can do which is closer to Port Jackson as well.

Otherwise we spent our time swimming, walking the beach, playing board games like Wingspan (can't recommend this game enough!) and generally relaxing. Having very little phone reception was also rather blissful and it felt like you really were off the grid!

We can't wait to take our tent and explore more awesome NZ locations - do you have any hot tips for great spots we should visit next? Send me a message to let me know! 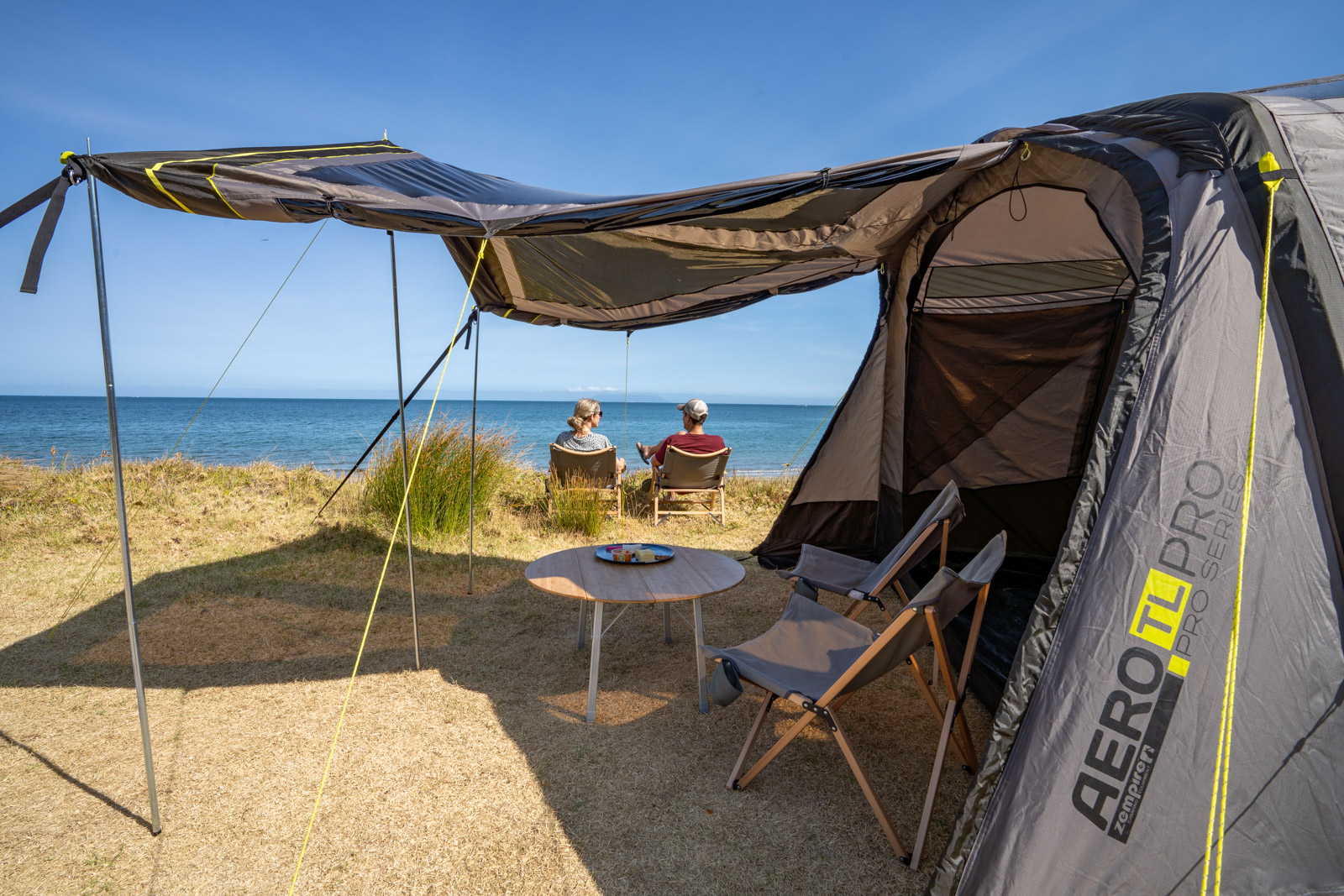