Taking older kids on a motorhome adventure in the depths of winter might seem like a daunting task, but I promise you that if you plan enough interesting activities for them in-between all the mind-blowing scenery, then they’ll be sure to enjoy the trip just as much as you. We spent 10 days travelling around the South Island in July 2020 with Wilderness Motorhomes in their Suite motorhome and were fortunate to get some great weather conditions, but that was as much down to our planning and last minute itinerary changes as it was good luck. I had an original itinerary planned which we ended up changing regularly after looking at the weather forecast so we could guarantee the best weather conditions in certain locations like Mount Cook. Here are 10 ways we enjoyed our family adventure together:

1. Exploring at the International Antarctic Centre in Christchurch

Experiencing what life must be like in the Antarctic storm simulation, and riding the Haaglund vehicles up and over crazy terrain no other vehicle would be able to attempt was a fabulous start to our trip straight after picking up our motorhome - we made it the Centre just in time for the blue penguin feeding and spent most of the day exploring at the Centre before we headed out to Akaroa for the night.

2. A hike up Mount Sunday (for all the LOTR fans)

Since watching the Lord of the Rings for the first time in lockdown, my oldest (age 14) has become a huge fan, he's watched the whole series about 6 times in 3 months, so it made sense to incorporate a hike up Mount Sunday otherwise known as Edoras, the home of the Rohan people in the movies. The day we hiked was simply glorious, it had snowed up in the hills earlier in the day, but this soon cleared leaving a stunning day for us to enjoy. It's a pretty easy walk at only half an hour each way and only the last five minutes is steep, the rest is flat and gentle. While on the top, the boys found plenty of rock faces to climb up while we simply drank in the 360 degree views around the valley.

Give a kid a rock and they’ll happily throw it in any river or lake going, and my two are no different. But on this trip there was the added element of being able to try and break ice most places we went since it was so cold which only added to the fun. When we were at Mount Sunday, they even managed to throw rocks in the river as I was walking across the swing-bridge and got me wet - monkeys! Another spot which entranced us was the ice reflections in Lake Middleton in Ohau, it didn't seem possible they were there given it was actually blowing a gale, and the lake was melting so fast the boys didn't have long to try and break the ice. The best morning for rock skimming was at Wilson Bay in Queenstown with the perfect shaped pebbles lining the shore, the chilly conditions didn't deter our fun by any means though it felt rather strange walking down to the shore with the pebbles frozen together and crunching underfoot.

It had been 6 years since we last took the boys luging in Queenstown and I have vivid memories of my youngest at age 4 (now 10) desperately wanting a turn on the luge but being so deadly scared of the open chairlift that he refused to go up - Dad came to the rescue that day and walked all the way to the top with him just so he could experience the thrill of the downhill. This time he was first in line to get up there and was faster down the track than his older brother - oh what a difference a few years makes! You really can't beat the views from up here at the Skyline Gondola, and going up late afternoon meant I was able to capture sunset at the same time - bonus!

I’d wanted to do this epic day hike with the family 3 years ago last time we were down south together, but the weather just didn’t play ball for us then. This time there was no issue with a bluebird, chilly day at Mount Cook. This hike is one that every New Zealander should get to experience, it was my third time walking it and it was by far the busiest I've seen it which I found interesting since there's currently no international tourists but it was school holidays, so good to see others out enjoying it too.

We were not only amazed to see an avalanche come down the face of Mount Cook while we were walking, but even more surprised to reach the end of the track and discover the glacier lake half frozen. Much to our chagrin, the boys insisted on walking out far enough so they could stand on icebergs that were frozen solid in the lake, i took comfort from the fact that there were quite a few people out further than they were, and no matter how hard they tried to break the ice with rocks, it remained intact - this was such a unique experience and one you might never repeat no matter how many times we return so it felt pretty special to experience Mount Cook like this!

6. Gazing up at the stars in the Dark Sky Reserve

Although my boys don’t share the same passion for photography that I do, I made them come out to see the stars while we were staying in the heart of Mount Cook at White Horse Hill campsite. Whether it was just lip service to keep mum happy I'll never know (haha), but they seemed to be mighty impressed with the abundance of stars visible overhead at Mount Cook when I dragged them outside in their onesies at 7pm to show them what I was capturing on camera.‍

7. DVDs and onboard Wifi

Let's be honest for a minute. No matter how great the weather and scenery, most kids these days are going to gravitate towards time with technology, and it was awesome to have the option to chill inside in the evenings with the onboard WiFi when it was dark and cold outside. It meant the kids could FaceTime their friends which they did a few times or play all the online games they wanted. I was never going to expect them to join me in below zero temperatures in the morning for sunrise either, so the fact they could hang out close by in the warmth of the camper with access to the Internet was a godsend. We also borrowed several DVDs from the Wilderness library including LOTR, which meant we could get inspired in advance by the sweeping scenery before our visit to Mount Sunday.

This was a bit of a last minute find on the last day of our trip and one that the big kid (aka hubby) enjoyed just as much as the smaller ones. We'd walked up Mt John to see the panoramic views over Tekapo from the summit, and spied the snow tube park at Tekapo Springs on our way. The boys had an hour session to enjoy zooming down the hill on either single or double tubes, and it was so good to be able to soak in the hot pools straight afterwards to warm up - we definitely needed this when it wasn't much above zero degrees mid-afternoon!

Another favourite family past-time of ours is playing card and board games - we're pretty competitive though so there are usually a few arguments along the way but we always make up at the end of it - you can see there's some serious concentration faces below haha! The motorhome dining area set up is perfect for a tournament or two in the evenings - we had several nights of epic Five Crowns, Phase 10 and Quiddler competitions all the while keeping cosy and warm with the awesome gas central heating in the motorhome.

One of the great freedoms of travelling by camper is being able to change plans at the last minute. We'd always planned to have 1 night in the Ashburton Lakes area but it turned into two when we made a last minute decision to spend the night at Lake Heron as well. When we turned up at dusk we had the whole campsite to ourselves, and being 40km from civilisation and with no cellphone reception and a very dodgy long drop toilet with a broken door it really felt like a wilderness experience. Hearing what sounded like gentle rain on the roof during the night turned out to be a fine layer of snow which then got heavier around dawn, and before you could blink there was a good 5cm on the ground - enough for us to have a snowball fight, make snow angels and bring a snowman to life. It was resoundingly the best experience of the trip for us all.

It was a first for all of us to wake up to snow right outside our door, a first for the boys to build a snowman and throw snowballs at each other, and a first for us to have to figure out how to put snow chains on the camper so we could drive out of there! What was truly the best moment of the trip turned out to be the least planned one, and the fact we just happened to be in the right place at the right time to experience this moment is something we'll never forget.

We travelled courtesy of Wilderness Motorhomes in their Suite motorhome but all opinions are my own. 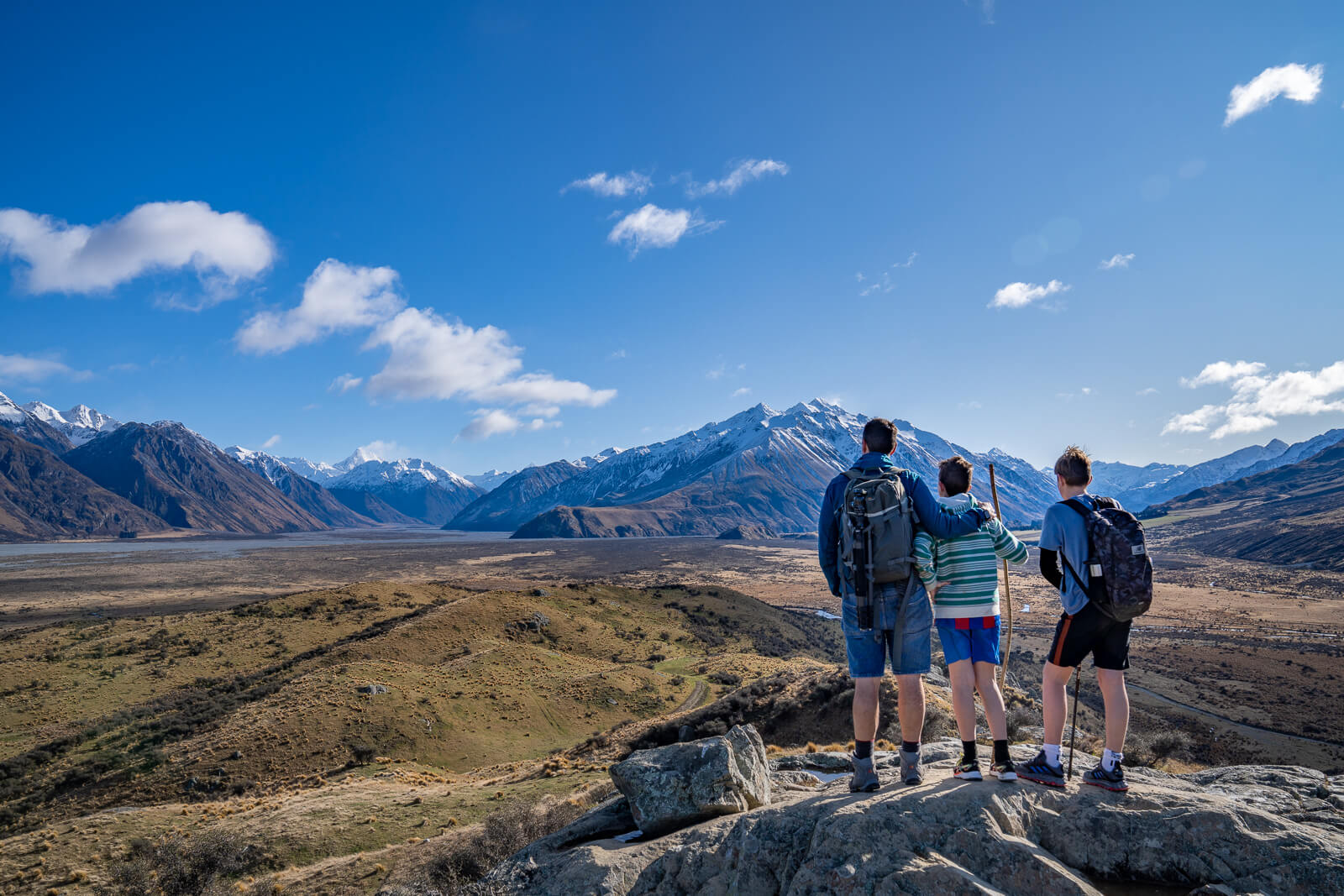