If you've done your fair share of travel around the South Island, how do you ensure you can capture new and unique New Zealand landscape photography images? Well by going to new places for a start. On my recent 10-day South Island trip with the family, I deliberately planned a route that included quite a few new locations and rather than being a loop route which we would be forced to continue on regardless of the weather, I planned it as an 'out and back' route with Christchurch as the hub.  This meant we went east to Akaroa, north to Hanmer Springs, west to Ashburton Lakes and then south to Mt Cook, Twizel and Queenstown. This also afforded us the luxury of being able to choose the order in which we completed these individual routes, and my original itinerary looked nothing like what we actually ended up doing as we changed it based on the weather in these places. But that's also the beauty of travelling via motorhome (we travelled with Wilderness Motorhomes in the Suite motorhome) where you can make last minute changes on the fly, and it's the most flexible way to see New Zealand for sure!

Here are 13 incredible South Island views that you'll want to see for yourself:

1. The view to Mount Sunday

I enjoyed our outing to Mount Sunday SO much more than I ever expected to. The drive to get there is superb, as you come down the hill into the valley the mountains just seem to leap right out at you. In particular, the view across the Rangitata River valley to McClure Peak and Mount D'Archaic with their pointy peaks is just so impressive. This is not a view I've often seen photographed and having a long zoom lens here really helped bring the mountains into sharp focus. It had snowed the night before in the hills and fresh snow made the textures on the hillsides really stand out. Mount Sunday in the lower foreground at 600 metres appears positively tiny in comparison to the other peaks which are mostly over 2,000 metres.

I could never get sick of sunrise here, even though I've now shot it 3 times with quite similar clear skies, every morning has been just a little bit different based on the wind and the difference in the icebergs in the lake. This time I had hubby for company which was new, and this time I focused on capturing both the ice on the foreshore providing foreground interest, and the sight of the wind picking up snow drift on the very tip of Aoraki Mount Cook as the first light hit the peak.

After spending the night in a random field just outside Hanmer Springs for the small price of $5 thanks to a local tip-off, we woke early and headed ten minutes out of town to the Waiau Ferry Bridge viewpoint. It was the perfect place to park up for breakfast and to capture the scene of the winding river far below, the colour of the water made a great contrast to the pinks in the sky and the orange of the hills when they caught the first sun light.

4. A morning full of mood at Lake Camp

The night we spent at Lake Camp was one of the highlights of the trip because of the beautifully calm and moody conditions we experienced at sunrise looking across to Mt Potts. It had been blowing a gale at sunset and there was zero chance of reflections, so I was pretty excited to wake up and see such lovely reflections here at dawn. The snow from the previous day was still hanging around on the ground which added an extra layer of interest to the overall scene too.

It's fascinating to me that mountain scenery can be so different from one valley to the next. The mountains at Lake Heron are far more rounded and less peaky (if there's such a word) than those at Lake Camp one valley over but they're equally lovely. We arrived here very late and I only caught the tail end of a muted sunset, but looking back now I realise these unusual colour tones that evening were signalling that snow was on the way.

6. A hike for panoramic views over Lake Benmore

The hike up Lake Benmore is incredibly scenic with panoramic views in all different directions. The sunset I captured up here on a windy evening turned into a show stopper with colour and light everywhere - it was hard to know where to point the camera if I'm honest with different types of cloud all over the place, a bit of a photographer's dream! The island in the middle of the lake reminds me a bit of what a Loch Ness monster might look like too - or is that just my vivid imagination?!

Anyone who’s been to Mount Cook knows this is a great location to get a view of the mountains in Mount Cook National Park from further away. But to see it in such incredible early morning light on what turned out to be the best sunrise of the trip was an added bonus, I was in seventh heaven capturing both the high cloud direcly above the peak and the awesome lenticular clouds that formed over Lake Pukaki.

8. The mighty peak of La Perouse at last light

It's really easy to get mesmerised by the mighty peak of Aoraki Mount Cook whenever you're photographing in the national park. But the night we stayed out at Glentanner, I was able to capture a really unique view of La Perouse looking down the Hooker Valley. Usually it would be overshadowed and overlooked by Mount Cook, but on this evening, Mount Cook was under a cloak of cloud and the light hitting La Perouse was just sensational. I loved the v-shaped valleys that framed the view through to this peak to the west of Mount Cook. At 3,000 metres it's an impressive peak in its own right and it was awesome to capture the last light kissing the peak.

We’d originally intended to stay the night in the valley but the road got a bit dodgy and less maintained the further in we travelled, and we didn’t fancy getting stuck in there with no reception and no one around for miles. In the end we turned around at a beautiful wetland spot and I was able to capture the lovely sunset hues over the mountains. The little tussocky islands reminded me of the Lorax movie - have you seen it?

I'm a little bit sheepish to admit, this was my first time visiting Lake Ohau which is crazy when I've done so many trips to the Mackenzie region, and despite it blowing an absolute gale when we turned up, little Lake Middleton hidden in the trees was showing off with perfect reflections. I thought to myself HOW is this even possible? Until I realised that they were actually ICE reflections. They were melting rather quickly as the wind got stronger and stronger but I had enough time to capture a few shots - it's a spot I think I'd like to come back and camp at again in the future for sure.

11. Three for One Stunning Twizel Views

It's simply impossible to pick a favourite spot around Twizel,  there are just so many wonderful lakes dotted around the area, so this is a little 3-for-1 bonus from Lake Ruataniwha, Wairepo Arm and Loch Cameron. After leaving Peter's Lookout for sunrise, we drove straight to Twizel intending to get a coffee. But we made a wee detour to Lake Ruataniwha on the way and boy was I glad I had - the clouds were looking simply stunning as well as the gentle reflections on the lake! Later that day, I heard there were plans to remove the wilding pines around the lake and I was horrified! Thankfully it sounds like the ones right by the lake are able to remain, as they really do make a beautiful scene.

Three years ago, I took a similar shot at Wairepo Arm near sunset and I remember thinking how lovely the clouds and contrasting blue and gold colours were that day too. I'm always impressed with just how much colour the willow trees hold onto during the winter, making a lovely orange in contrast to the deep blue sky.

On our return journey from Queenstown, we unexpectedly ended up staying the night in Twizel after turning round in the Ahuriri Valley when the road got a bit too tricky to navigate, but I wasn't upset at all the following morning when I managed to capture some frosty foggy hues at Loch Cameron just outside of Twizel.

I was also able to capture this unusual aerial view of the trees on the lake once the sun came up - I've had people say it looks like an amoebae or Homer Simpson - which do you think it most looks like?!

This is a famous lookout spot on the Queenstown-Glenorchy Road and one that’s very easy to pull over and enjoy the views even when driving a big motorhome like the Wilderness Glider 4. The views in both directions down Lake Wakatipu are simply jaw dropping and if you can coincide your visit early or late in the day you might even have this spot all to yourself with stunning light. Due to COVID, I pretty much had most photography spots to myself throughout the trip, so I was somewhat surprised to have to share this spot with 3 Chinese photographers (from Auckland). It was a clear sky sunrise and even though it would have been nice to get colourful clouds, the hues were pretty wonderful as it was!

It's easy to get a bit blase at Lake Tekapo and just shoot the Church of the Good Shepherd with its scenic outlook, though it's much harder these days with the big fence up to keep people out after hours. We stayed the night at the Tekapo Holiday Park and after a late swim in the hot pools, I decided I'd just wander down to the lake front and shoot across the lake. Lucky for me the sky put on a gentle pastel pink show and with the calm water providing lovely rippled reflections it was such a serene scene.

On our final morning, it was -4, the coldest morning yet. After spending the morning shooting at the lakefront, the very LAST image I captured on our trip before we returned to Christchurch was this one. Even though I have shot the church a few times on previous visits, it's the first time I've captured it from this angle with a longer zoom bringing its frosty roof into contrast with the mountains behind.

It would be hard to ever top this trip for incredible photography conditions - I think you can tell from these images that we were very fortunate with calm and settled weather almost everywhere we went. For me, it was amazing to get so much new content from incredible places that I'd not visited before, and to get some different compositions at spots I had visited in the past.

I'd love to hear which of these views above are your favourite? Drop me a line and let me know.

If you enjoyed this post, why not check out my post '10 ways to experience the South Island with kids' too 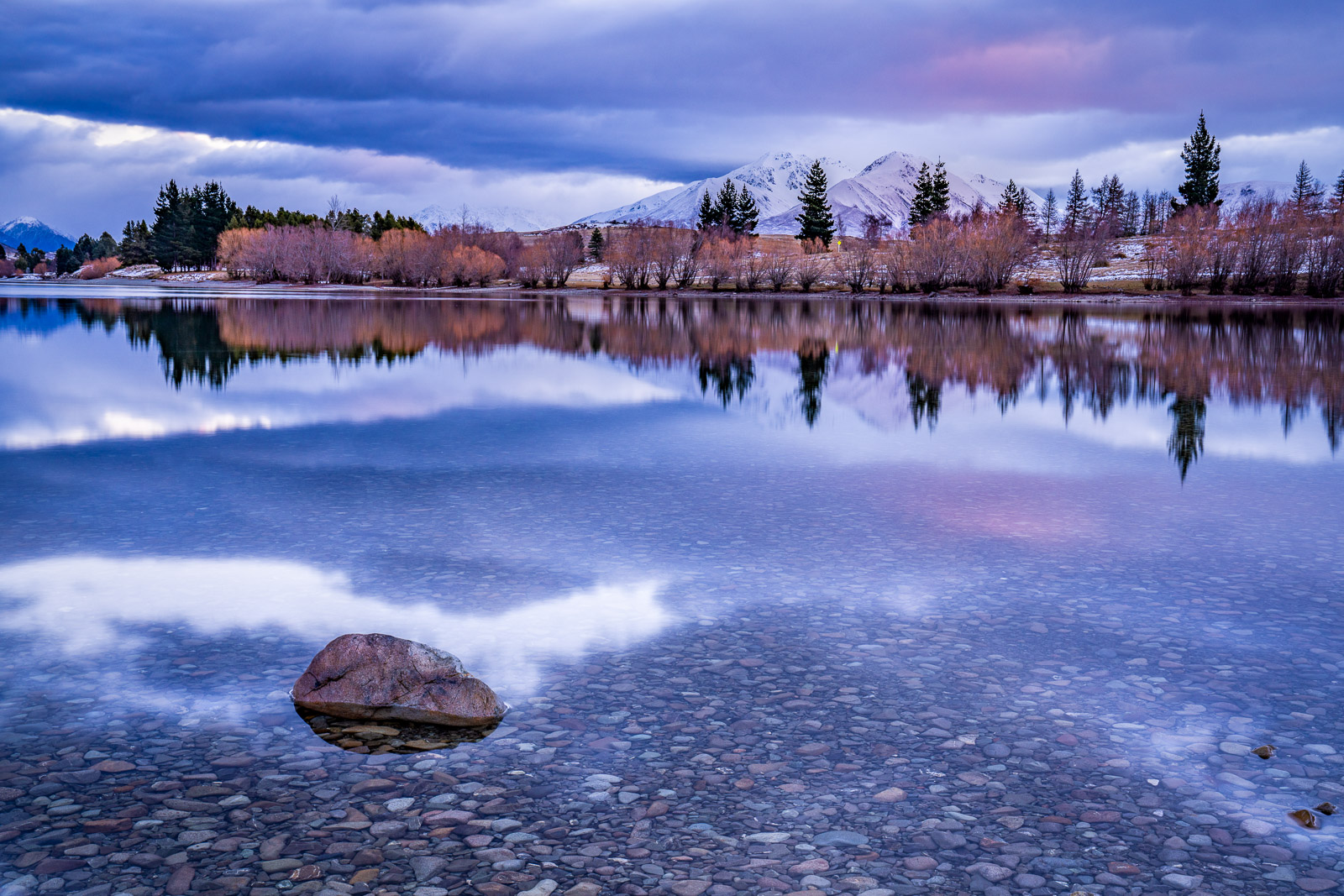