On Top of the World - Hiking The Pinnacles, Coromandel

Hiking The Pinnacles in Coromandel has long been on my bucket list. I was meant to do it in February 2020, but ended up travelling down south for two weeks on a private tour with two lovely Americans so had to put it off, then as we all know lockdown happened in March and that put paid to doing it last summer.

Fast forward to summer 2021, and with a 4-day hike of the Milford Track looming in a few months, I thought The Pinnacles would be a great overnight hike to get the legs back into the swing of hiking with a pack on. We were almost thwarted again when my hubby Mark managed to pull a muscle in his back and neck and wasn't sure if he'd even be able to walk, but like the trooper he is, he decided to battle through it so we could complete the hike with two of our long-time friends.

The hike starts about 40 minutes inland from Thames at the end of Kauaeranga Valley Road. There's a reasonable sized carpark, though it was full to bursting being a public holiday weekend with both day walkers and overnight hikers' cars so that's something to bear in mind if you are planning this walk, it will be busy on a busy weekend.

Once we set off, the first couple of kilometres was reasonably gentle with a wide track, which does somewhat lull you into a false sense of complacency. After that the track starts to climb quite steeply with a lot of large steps (I swear someone over six foot must have built this track!) for a couple of kilometres, and there are points on the track where I can imagine it would be quite slippery after rain.

It was a relief to reach the Hydro Camp after about 1.5 hours of walking, from here we knew it would be about another 45 minutes to the hut and we'd start to get some views. It was a glorious day, and being a southerly the skies weren't at all hazy and it wasn't too hot for walking - though we all still sweated from the uphill climb! We reached the hut just after 2pm - which was good timing as the hut is closed between 9am and 2.30pm for cleaning. We had enough time for a cup of coffee and some snacks before the warden came to check us in.

The Pinnacles Hut is the largest DOC hut in NZ and sleeps 80 and has great facilities including a barbecue! Though water can be limited in summer months and you do need to boil it before use (or bring purification tablets). The setting is amazing with views all around including up to the summit of The Pinnacles where we were headed for sunset.

Being first to be checked in, we got the pick of the beds which was awesome. Instead of being cramped up side by side with strangers, we had four beds to top and tail and a big avenue between us and the next lot of beds. We passed the afternoon playing cards, rewarding ourselves with some wine and chatting to fellow hikers before cooking an early dinner of Radix Nutrition and Back Country dehydrated meals - the only way to go when you're hiking to keep weight down.

We set off up to the summit about 2 hours before sunset, and despite how hard the climb looks (see the bottom right photo above) it actually only took 40 minutes to get up as the stairs allow you to gain elevation quickly. The last part of the climb up metal ladder staircases and using metal rungs carved into the rock is a bit hairy and I can imagine anyone who has trouble with heights might not enjoy it much, but it's very safe and not too difficult if you just take your time.

The views from the top are magnificent, with such a clear day we could see all the way to Mt Te Aroha in the south, Whangamata in the east and the Firth of Thames in the west. I was really thrilled to see such lovely clouds gathering which made for some beautiful rays and light during golden hour before the sun sank out of sight.

It was really great to see just how many people had chosen to make the hike up during sunset, though I was a bit dubious about the sensibility of three young guys who were planning to hike all the way back out again in the dark, but maybe that's just because I'm not a big fan of downhill hiking full stop!

The views from the top also reminded me of some of the epic viewpoints you can see from the Blue Mountains in Sydney, though they are mostly ones you can drive up to instead of having put the hard yards in with a 3 hour uphill slog, so this definitely felt more rewarding.

We made sure we left with plenty of time to get down before it was dark, as coming down is always harder than going up especially climbing down steep ladders. While we were a little bit worried about how we'd all sleep, and let's face it sleeping with 40 other people isn't very conducive to a good night's sleep, there were no terribly loud snorers and having ear plugs was a help too (and something I always recommend for any overnight hut experience).

Sunrise dawned clear so we opted to watch the sun appear over the hills beside the summit rather than making the trek back up the top. After a satisfying Radix breakfast, we headed off about 8.30am and were back to the carpark by 11am, it was definitely quicker on the way down despite how slow I am on the downhill.

You can also walk to The Pinnacles as a day hike, and I imagine with only carrying enough food and water for the day, it would be a quicker walk, on average you might expect it to take 5.5-7 hours return. I'm really glad we opted for the overnight hike though, the experience of staying in such a well serviced hut in a great location and the amazing sunset views were more than worth carrying the extra gear! 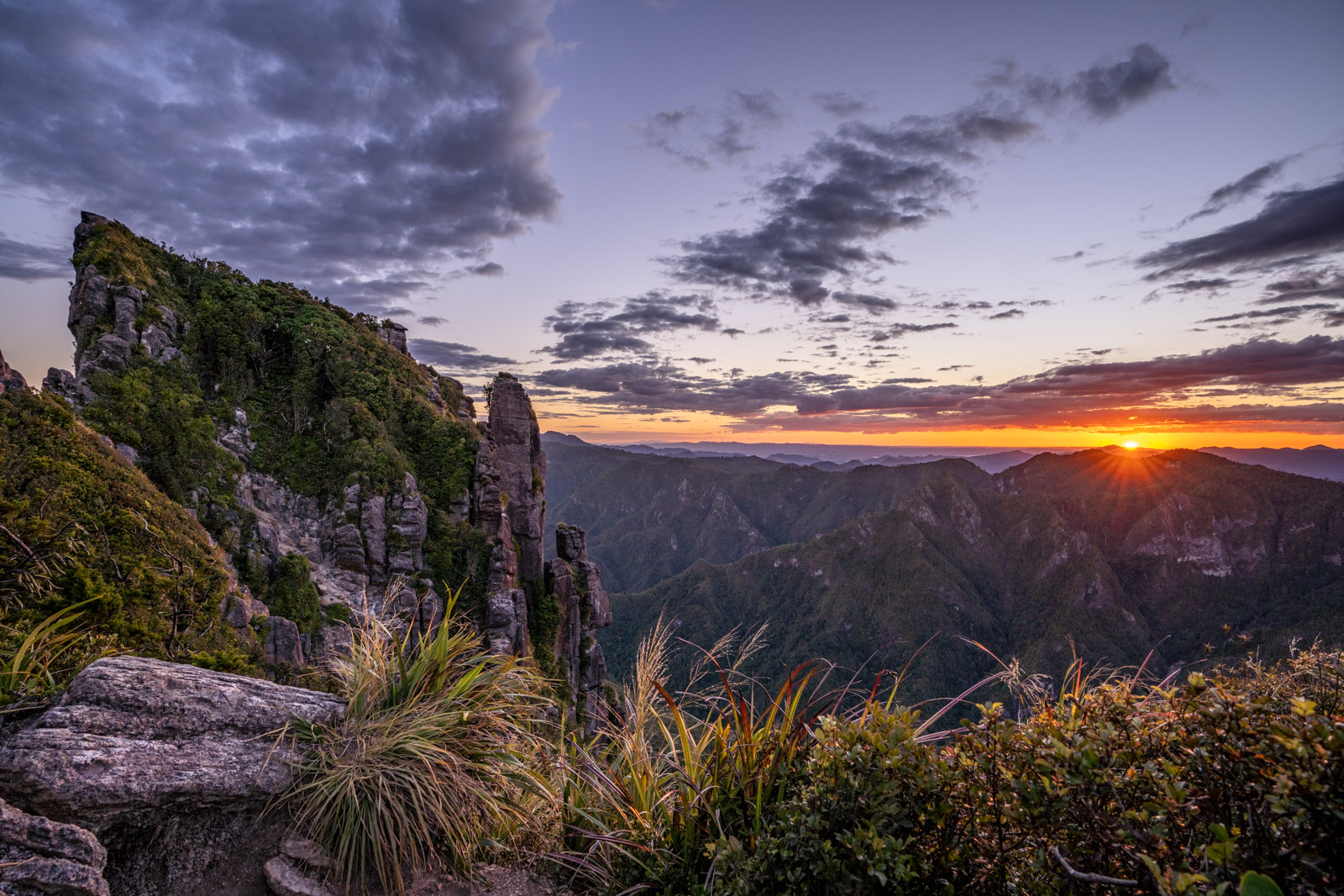