Whoever said you have to visit the South Island to photograph the best autumn landscapes in New Zealand perhaps hasn't been to Hawkes Bay! Autumn here is awash with rows of vineyards turning gold, tree-lined avenues with golden colour almost everywhere you drive, and peaks and valleys with a variety of colour nestled in gorgeous pockets. During autumn, this region appears particularly dry with the golden, brown hillsides adding to the overall autumn hues. I spent a long weekend in Hawkes Bay in early May, hunting high and low for the best autumn colour to share with you, so here are my 7 top locations in Hawkes Bay during autumn.

The Tukituki Valley (not to be confused with the Matukituku Valley just outside of Wanaka) is a lovely river valley nestled under the shadow of Te Mata Peak. It's where the famous Craggy Range vineyard is based and it makes a lovely area to drive through on your way to Waimarama, Maraetotara Falls or further south into more remote areas of central Hawkes Bay. There are wonderful pockets of autumn colour nestled into the hillsides along here and the views back towards Te Mata Peak are particularly impressive, especially from Mt Erin Lookout.

Further afield on the drive back from Kairakau Beach we also came upon this lovely scene of rolling hills and autumn colours complete with a few sheep dotted under the trees, so if you have time to spare make sure you drive a little further afield to explore.

On the afternoon we drove through the valley the clouds and light were very interesting and provided a pretty unique addition to the scenes we were seeing.

You won't find this lake named on Google Maps, it's just a wee bit further on the road out to Waimarama after leaving the Tukituki Valley but it really captured my imagination. It's a small lake on the side of the road with lots of birdlife, but with an aerial perspective you can even better appreciate the variety of autumn colour it offers.

We enjoyed our time here so much that we came back and shot more footage at the other end of the lake the following morning looking in the other direction towards Te Mata Peak. Which view do you prefer?

Speaking of Te Mata Peak, the view from here is pretty special, especially if you can incorporate a sunrise shoot into your scene to capture the golden light on the hills which also nicely highlights the autumn colour in the valley below. Luckily you can drive to the very top of Te Mata Peak which sure is handy for sunrise, it's about a 20 minute drive from Hastings or 10 minutes from Havelock North to get up to all the viewpoints.

On our first morning we were treated to a rather colourful sky with the sun breaking through a gap on the horizon, it was much, much better than we'd been expecting after hearing rain on the roof of the campervan a few times during the night.

The following morning we decided to make the trip back up to the Peak, hoping for very different conditions based on the forecast and that is exactly what we got! A lot less cloud and much more golden light and shadow once the sun had risen, it was quite sensational to witness!

For me, the photo below really encapsulates autumn in the Hawkes Bay - this is looking down on Craggy Range vineyard and into the Tukituki Valley.

Heading further afield now, and driving south on State Highway 2 from Havelock North, you'll find the Pekapeka Wetlands about 10 minutes out of town. This short wetland walkway hosts a large number of birds but for photography the boardwalk also provides a great subject with a leading line through the middle of the frame, and with the dry, brown hills and autumn-coloured reeds in the water it made for an unusual autumnal scene.

If you drive slightly further south from the wetlands on State Highway 2, you'll come upon what must be one of the loveliest country church settings in all of New Zealand, so when you add autumn into the mix it's simply delightful. We were there on quite a breezy day and catching the falling leaves in some of our shots made for a unique result.

If you drive around the Hawkes Bay long enough in autumn, you're sure to come upon a few famous tree lined avenues like the ones outside Craggy Range, and the famous 'Oak Avenue' in Hastings. Unfortunately, we felt as if we'd arrived too late for the Craggy Range trees, one whole side of the avenue had really started to lose its leaves so it wasn't very symmetrical. The opposite was true of Oak Avenue, it seemed like the leaves there were still quite green and needed a bit longer to colour up - plus when we visited the light was really quite dull and it wasn't a very inspiring scene.

However we were REALLY determined to find at least one avenue of trees to shoot, so we were pretty excited to stumble upon this private driveway not too far from Havelock North, and even better we managed to shoot it during a rare time when the sunlight broke through on what was otherwise a pretty cloudy day.

I feel as if I've saved the best till last. There aren't enough superlatives to describe the morning conditions we experienced at Lake Tutira, which is about an hour's drive north of Hastings, or 40 minutes from Napier. We had spent the afternoon photographing Te Ana Falls which was a really lovely location and much nicer than I was expecting from photos I'd seen, but that will have to keep for another post, since we're talking autumn here and not waterfalls!

We arrived at Lake Tutira almost on dusk and it was VERY dull and almost drizzling, but even in those conditions we could tell that we were somewhere pretty special.

The next morning, the forecast predictions were bang on - thick fog! We managed to escape the fog briefly for an interesting roadside sunrise by driving further north of the lake. Compositions were a little tricky as we had to just pull over when we saw the sky go crazy but I think we did OK!

We headed back into the fog, hoping to find some unique shots at the lake as we waited for the fog to lift. I absolutely loved this view of what seemed like a fairytale island in the middle of the lake - very reminiscent of a scene from King Arthur and Avalon.

As much as we were hoping for the fog to lift, the opportunities for shots where the autumn colours were able to provide a brilliant feature against a subdued foggy. backdrop were also pretty unique.

The forecast had originally been for the fog to lift around 9am so we headed back for breakfast and waited. Right on cue the fog began to clear leaving us with the most incredible scene to capture.

We spent a really long time just enjoying this view and the changing light without feeling any need to move on.

Hours seemed to pass as we just watched the changing light.

The autumn colours surrounding the lake also looked pretty impressive from above as well.

It was impossibly hard to tear ourselves away from this place, so it was only when the reflections disappeared that we felt like we could bear to leave. What an amazing morning it had been, Hawkes Bay sure chose to show us her true autumn colours in all their glory. 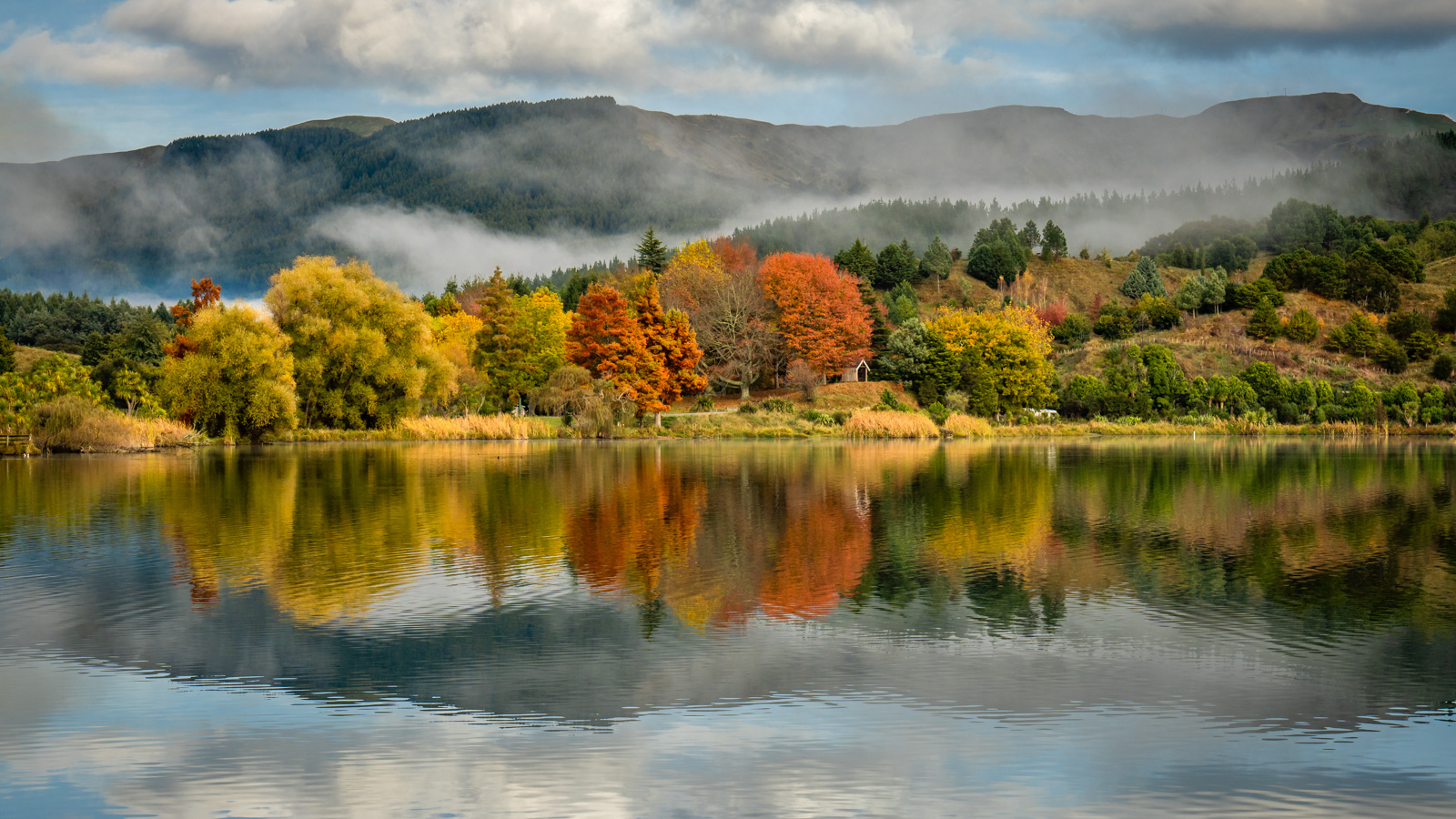