5 Tips for Finding the Best Landscape Photography Conditions in NZ

People often ask me how I manage to achieve such great results when I'm on landscape photography trips around New Zealand, stating that I must be just 'lucky'. And of course there is always an element of luck involved with the weather, as forecasts can and do get it wrong, especially in NZ. Living in a very thin island country, we are faced with constantly changing forecasts and microclimates that means the weather can be completely different even just ten minutes up the road.

However.... I have spent enough time reading weather forecasts in New Zealand now to know that most of the time, the reason why I even have a chance of achieving 'the shot' is because of all the planning that's involved. So here are my top tips for you to experience great light in amazing landscape locations around NZ.

1. Check and check again - forecasts are your friend

You can't just rely on one weather app, and if you are just using Metservice to plan your trips in New Zealand, I'm sorry but this won't cut it unless you're only spending time in the big cities. Metservice will give you the basics in the main centres like wind speed/direction and rainfall, but what you really need to know is a combination of cloud cover, wind, and actual satellite conditions in locations to really give you the full picture. Not only that but the forecasts will often change every couple of hours so it pays to be checking regularly throughout the day. It also pays not to trust forecasts that are more than 1-2 days ahead as they will always change, but when it comes to the current day and even tomorrow that's when you should start obsessing over them!

Here are my picks for the best weather apps to use:

Ask any seasoned landscape photographer in New Zealand what weather app they rate and chances are YR will be first on the list. Yr is a Norwegian weather forecasting app but I can say quite confidently from experience that has proven to be the most accurate for predicting conditions. There is both an app and a desktop version but I recommend using the desktop version even if you are searching on your phone so that you can use the Details tab. This breaks down the weather for a location to an hour by hour level including wind speed and direction as well as the individual levels of high, middle and low cloud, but more on the importance of clouds later.

Yr is a table based listbut it has everything you need to see in one view - even when searching on a mobile. It will allow you to search for very specific locations which is important because, like I mentioned, in some places in NZ the forecast will be completely different just 10 minutes up the road. Take the Mackenzie Country for example, which has locations like Twizel, Lake Tekapo, Aoraki Mount Cook, Ohau and Omarama all within an hour's drive. Because the Southern Alps (and NZ's tallest peaks) are in this region, the weather at these places has microclimates like nowhere else I've experienced in NZ.

Windy is another favourite app of mine, and it's also much more visual. You can use either the desktop or mobile app, they are much the same. Unlike YR where you have to search for a location, with Windy you can just zoom in on the map to click on a forecast, and also change the layers to look at wind, rain, and clouds across a wider region or a very specific area. Windy will also give you a pictorial view of the cloud layers and heights combined with wind speed/direction and temperature which can be easier to read than the percentage of cloud that YR shows. While it's possibly not always as accurate as YR, where Windy really excels is with its local webcams and up-to-date satellite imagery.

Webcams are an invaluable tool for planning - especially if you are torn between a couple of different locations for your ultimate destination on any given day. While not every location will have a local webcam, when you click on a location's forecast for Windy, it will suggest nearby webcams and this can be so helpful to see what is actually happening RIGHT NOW at a location. Here's a great example: on my last trip to the South Island, the entire central South Island and all the lakes were covered in low cloud and fog, but because we looked at the webcam we KNEW that Roy's Peak in Wanaka was bathed in glorious sunshine above the clouds - resulting in a last minute sunset mission to climb 1,000 metres up to the peak for sunset for some incredible shots of the inversion cloud and mountains - but we never would have known this was an option if we hadn't been checking the webcam.

One thing that photographers often overlook is what's happening on the satellite, choosing instead to focus only on what's happening where they want to go. BUT... for the skies to light up with great light during sunrise, sunset and golden hour, you need a gap on the horizon, especially if you are shooting near the coast which in New Zealand with it's 15,000km of coastline is most of the time! Windy has a great satellite imagery layer which will show you how the cloud looks over the entire country. For sunrise, you ideally want cloud that is showing a gap out to the east, and for sunset a gap to the west. This example below shows that there is a gap out to the west which could result in a good sunset later that day if you were on the West Coast.

4. Clouds can make it - understanding layers

Achieving great cloud formations and colour is the HOLY GRAIL for landscape photography - unless you are trying to shoot astrophotography at night when you don't want clouds at all! Most photographers would do anything to capture streaky high clouds that tend to cover the entire sky in colour AND better still their height means they won't obscure landscape features like mountains that you may want as a dominant subject in your scene. To achieve this you're really looking for as close to 100%. high cloud as possible.

That's not to say that other cloud layers don't photograph well - far from it. If you can get a combination of low, middle and high cloud this can also look amazing as the cloud at different levels will light up at different times depending on how low or high the sun is from the horizon. This can mean that you will achieve quite a different look in your shots over the course of even an hour as different parts of the cloud layers are highlighted. Or you could just get an all sky banger when there is a tiny gap on the horizon like there was on this particular morning at Brighton Beach in Dunedin during my weekend workshop.

What you don't want though is 100% low cloud - this is effectively a death wish for any colour happening, but if you are wanting to shoot moody black and white shots or you're looking nice even light to shoot at a waterfall then you might actively want to seek these conditions out.

5. A season for every location

As well as the immediate weather forecast on the day, the seasons can also play a BIG part in the prevailing weather and the look of the location you want to shoot. Of course, it makes sense to shoot the mountains in winter when they are at their snow capped best, and beaches in summer when they're looking warm and inviting. On the flip side, waterfalls often don't look good in late summer or autumn - some may even stop flowing altogether. Another thing to bear in mind is the light, summer light can be harsh especially in the middle of the day, whereas in winter the shorter days and lower angle of the sun may give you opportunities to shoot almost all day without harsh and contrasting shadows.

The seasons in New Zealand bring very different weather patterns. Winter is colder but often more settled down south but it can also bring days of fog and hoar frost when the temperatures stay low and there's not enough wind to push the clouds away.

Autumn is known for being crisp, clear and calm which is a great opportunity to capture reflections of autumn colours anywhere in the country.

Spring can often bring the windiest, most changeable weather. That being said our weather patterns don't always hold true to form year on year so this is only a guide.

So if you want to shoot at the best conditions for a given location, look at other shots that have been taken there that really resonate with you. What is it that appeals to you? Do you like the angle of the light in the shot? Is it obvious what season it has been captured in? It also pays to use an App like PhotoPills to see where the sun will be in relation to the scene you are shooting as this will change significantly depending on the season. I have favourite jetties I like to shoot at that line up really well in Spring and Autumn but not at all in summer or winter, so scouting thing like this out in advance will help you have the best opportunity to capture the scene in the lighting you want.

Based on PhotoPills you can see that this shot below wouldn't have been possible in summer as the sun (the orange line) will set a long way behind the peak but it is perfectly positioned in winter.

It's worth putting in the time and effort before you head to a location to see if you can work out which season is likely to show it off in the best light, or the kind of light you want to capture it in.

And finally, go with the flow

It might seem counterintuitive to finish with this extra tip. After spending so long recommending that you put in the hard work planning and getting to know the weather as best you can, how do you just turn up and go with the flow? Well....ultimately you can plan all you want but you still can't predict exactly how this will translate into reality. You may turn up to a location and find things don't look like you expect or they are completely different to what the forecast is showing, but don't despair!

The real test of a landscape photographer is finding a way to make the most of a scene when faced with conditions you DIDN'T expect. It's easy to capture a great image when everything lines up perfectly, but when it doesn't that's when the magic can actually happen as you find it in yourself to be creative using the conditions that are right in front of you to create something truly unique. 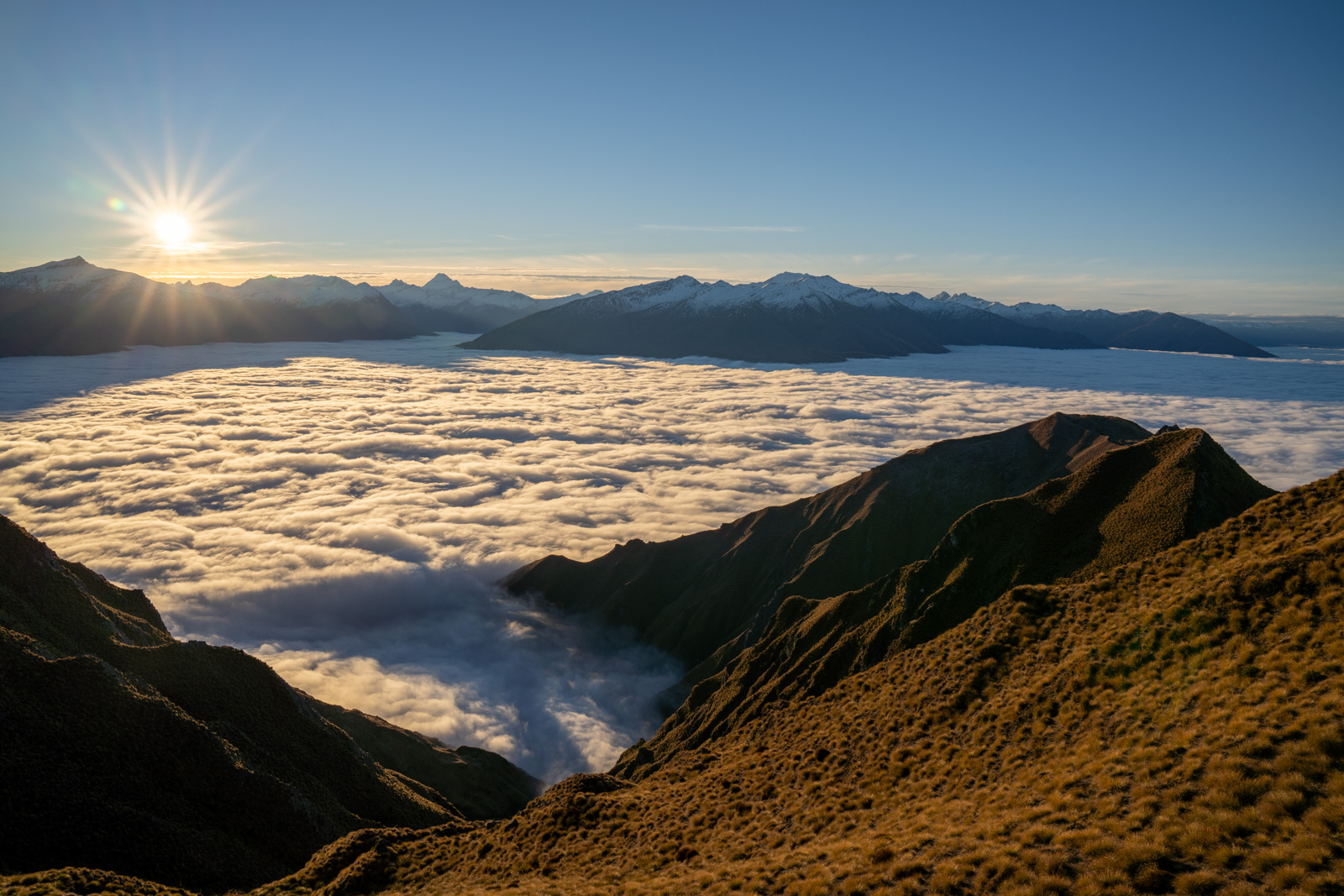