A beginners guide to shooting the stars (astrophotography)

Simple tips on how to shoot the night sky

I should probably start by saying there are people far more qualified than I am out there to tell you how to shoot the stars and the night sky, so this post isn't going to teach you how to do amazing stitched panoramas or star trails. However, I do get asked on a regular basis how to begin shooting the stars, so these are my easy to understand tips for how to get outdoors and start capturing the amazing heavens that are above our heads from a beginner's point of view.

1. A tripod - you'll need to be able to take long exposures - with shutter speeds of up to 30 seconds to capture stationary stars.

4. An app to help you figure out where the Milky Way will be in the sky at your location and time. There are several out there you can use but I rate PhotoPills the best - it's worth every cent and without it you'll just be guessing wildly.

Before I go out on an astrophotography shoot, I always check the moon phases, as a new moon is best to create the dark skies required to make the stars show up well in an image. The PhotoPills app is also invaluable for figuring out the direction and height of the Milky Way in the sky at any given time as well as the sun and moon rise/set.

To create a great Milky Way shot you still need other points of interest your shot, whether that is a mountain, lake reflections, a jetty, a person or rock formation. Personally I love shooting the Milky Way where there is calm water in the shot as you can get some great reflections.

I've also been lucky enough to shoot the stars in some pretty cool locations like at Hobbiton and Church of the Good Shepherd in Tekapo which is in NZ's incredible dark skies reserve.

If you want to capture the Milky Way at a reasonable hour (and not the wee small hours of the morning in the depths of winter), you'll want to pay attention to where the Milky Way will be - in the early months of winter May-June you can capture vertical shots of the Milky Way rising as soon as it gets dark, often as early as 7pm.

As the season gets later in the year the Milky Way gets higher in the sky so by September you'd be better off looking for horizontal Milky Way setting shots in the late evening around 10-11pm. After October the Milky Way pretty much disappears below the horizon and won't be back again till around February so make the most of those cold winter months!

You might think that you have to have a fancy DSLR or mirrorless camera to capture the Milky Way, but you'd be surprised - some point and shoot cameras are capable of capturing great starry night images - like the Canon G7x. I took this stitched shot early one morning in late February before I got up at 5am to walk the Tongariro Crossing.

In general any camera with a lens that is capable of shooting wide at 14-24mm and as low as f2.8-f4 will give you great results with the right settings.

What ISO should you use?

It's entirely up to you how high you want to increase your ISO, depending on how much ambient light there is you may be able to go as low as 1,600 but in dark locations, you might have to go as high as 5-10,000.

Using the 500 Rule for shutter speed

A shutter speed of 15-30 seconds is ideal but you will want to take into account the possibility of star trails the longer you have your shutter open. It all depends on your camera and the focal length of the lens you are using, for example: Sony A7rII with a 16mm focal length = 500/16 = 31 (round down to 30). Personally I shoot at between 15-25 seconds which you can do if you have a lens that is capable of f2.8.

Getting the Milky Way in focus

The best way to get your stars in focus is to find the brightest star in the sky and get this in the centre of your screen and manually focus till it looks pinpoint sharp. If you have focus peaking on, it may be easier to turn this off so you can see the stars better. Don't just set the camera's focus to infinity (which is tempting) and think that because the stars are a million miles away they'll be in focus. Always take some test shots and using playback zoom in to check if your stars are in focus before you go snap happy on lots of shots!

Have fun out there!

There's nothing quite like seeing a shot of the Milky Way come alive in your viewfinder to give you a real buzz and to make you eager for more! I'll never forget the first time I captured the Milky Way at Lake Tarawera 2.5 years ago, and though I knew very little about what I was doing I still came away with shots I thought were great at the time. It's all about learning and enjoying the process of getting more skilful with your shots.

It's always a buzz to see shooting stars on screen - the two nights I spent in Mount Cook National Park were just amazing for shooting stars - I was capturing one in almost every shot and saw at least a couple with my own eyes streaking across the sky. But you can be lucky any time of year - the shot on the right was taken in late November after the Milky Way has set for the year but the Magellanic cloud were still visible - you can see two shooting stars in this shot!

At certain times of the year you can also see several of the planets lined up in the night sky. I was lucky enough to see Saturn, Jupiter AND Mars all in the sky on this evening - it was a real treat. The image on the left is earlier in the evening but by 10pm three plants were visible - Jupiter top left, Saturn in the middle and Mars bottom right.

Don't be put off by a few clouds - obviously you can't capture the Milky Way through thick cloud but you'll be surprised just how cool your shots can look with some scattered cloud and the Milky Way peeking through.

Sometimes you'll be in the mood for capturing stars and it'll be a full moon or near to it. Don't despair, there are still some really cool night shots to be had under a moonlit sky like this shots below taken at Lake Matheson in the early morning with the light of the moon lighting up the mountains before dawn.

I still haven't managed to capture an aurora (it's a biggie on my bucket list) but I can say I've seen some pretty amazing airglow in the night skies - like this evening at Lake Tarawera where you can clearly the different lines of colour streaking in the sky.

I'm still nowhere near an expert as I'm not really too concerned about creating massive panoramas that stretch across the sky or using other techniques like star trails, but I do feel like I know enough to enjoy capturing the Milky Way whenever I find myself in a great location with clear skies and time on my hands!

If you'd like any more help or tips, please message me and I'll be happy to assist!

My weekend landscape photography workshops are based around the best times of the month and year for shooting astrophotography in New Zealand, so if you want hands-on learning on how to shoot the stars why not join in! For details on an astro workshop near you, visit my Workshops page. 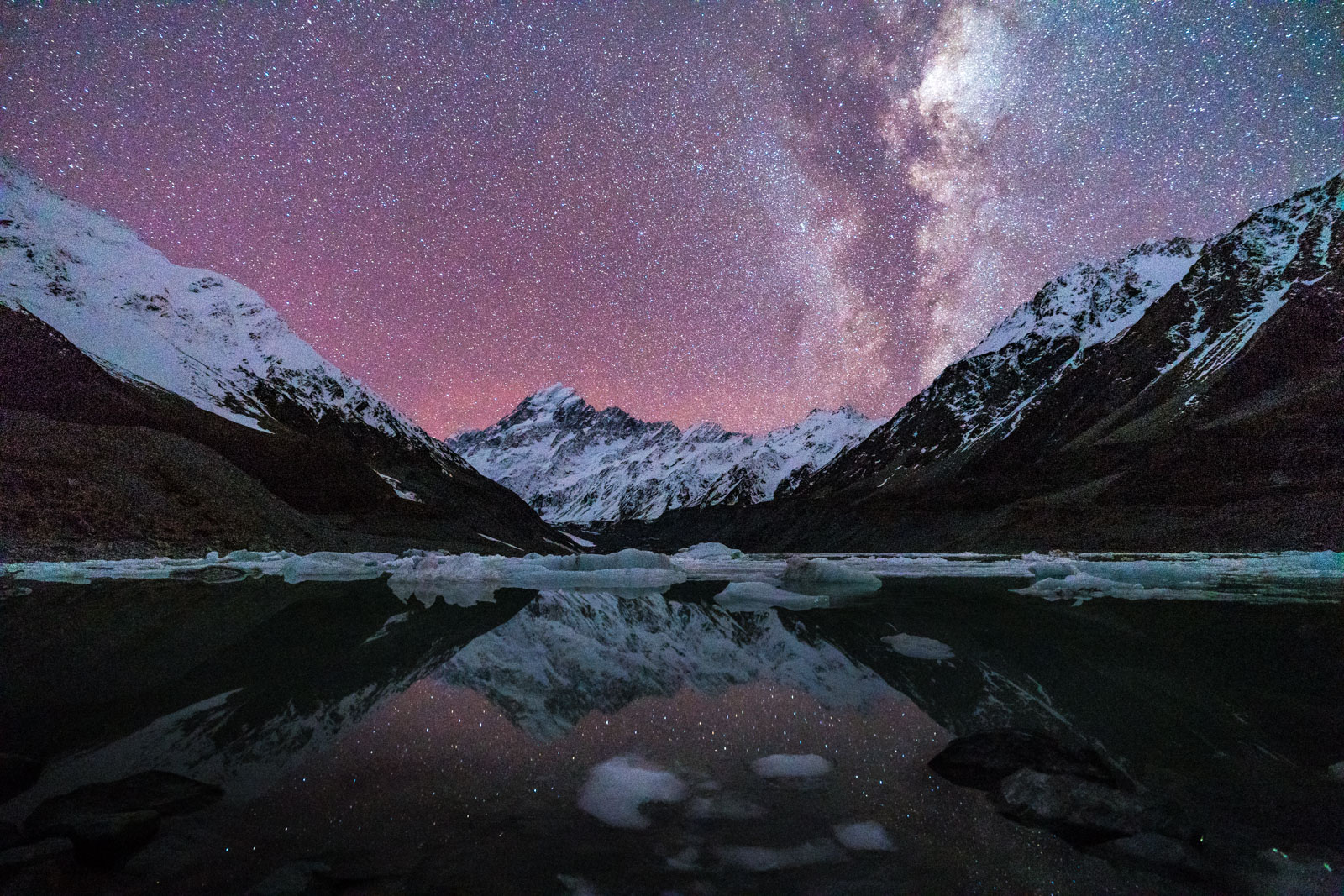